So things have been busy here at the Studio on March Break. Lots of different kids of sessions being photographed. But I wanted to take a minute and post an image from one of our Epic SPORTrait sessions. This is 13 year old Malkah and she is practicing Ninjutsu and has already obtained the rank of Brown Belt. I was fascinated with Malkah and her sport from the minute her mom Mosa McNeilly contacted me. Our family is involved with Karate so my curiosity with this form of self defense was of great interest to me. I asked this beautiful young lady to show me some of the moves she has learned. There are a lot of similarities to Karate….. but then there are many differences.

When we were doing the photo shoot Malkah had a really hard time not smiling ( not that that is a bad thing as she has a very contagious smile) but I wanted her to be serious for some of the photos. After trying unsuccessfully in getting her to look mean or serious ( mom didn’t help much with this either )  I gave Malkah the ultimatum….. if she smiled I would make her do 10 push ups…… WELL lets just say after I made her do the first 10 she had no problem putting on the serious look. I hope her Sensei approves….. Malkah’s mom just laughed 🙂

Below is the photo I created with Malkah I think it shows her power and beauty at the same time.

“John’s easy-going and genuine manner put Malkah at ease during the shoot and his background in karate gave him an understanding of her sport. Malkah is a Ninjutsu practitioner training with Sensei Arthur Kerry at the Takamatsu Ryu Ha Dojo in Guelph. Her dedication to her practice and her skills development nourish a sense of self confidence that permeates her life. Earning her brown belt was a proud milestone that coincided with turning 13 and becoming a teenager.” – Mosa McNeilly

Epic SPORTraits are becoming VERY popular at our studio. Contact us today with any questions you may have. 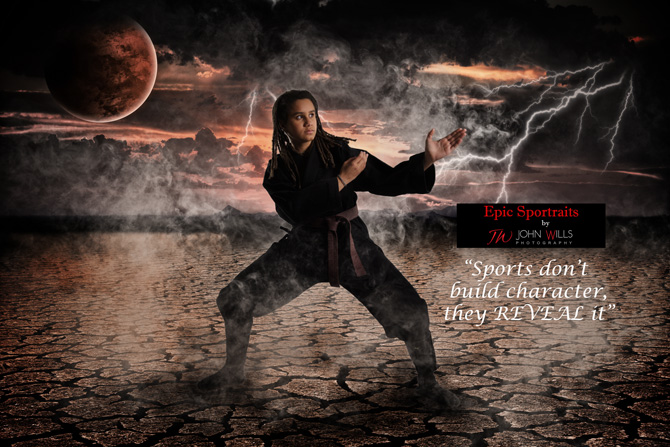