At first when Tanya Weissenboeck contacted me about photographing her 7 year old daughter for one of our Epic SPORTraits, I was excited. Then she told me that Noelyn was into Syncronized Swimming at a club called Waterloo Regional Synchronized Swim Club.

I am not shy to admit……. I was a bit worried on how I was going to photograph a 7 year old syncronize swimmer in my studio. But I told her I was up for the challenge. Young Noelyn was simply AMAZING. She helped me out with what kind of moves they do in the water and went on to demonstrate them. Holy crap I can’t even do those moves and poses on land never mind in the water. 🙂 Tanya and her beautiful daughter hung out with me in the studio for about 30 min. so I could capture as many different things I could so that I would have lots of images to choose from. The image below was one of the 5 I created. This is not the image that the Weissenboeck family purchased for their living room (we will show that one at a later time as I may just be entering it in competition this summer).

Photographing and editing these images has now opened the doors for some more amazing things we can do with our Epic SPORTRAITS. I already have some cool ideas for water polo and swimming …… just need an athlete now 🙂

This next part is taken from Tanya’s Facebook page 🙂

“When I noticed on Facebook that John Wills Photography was doing Sportraits I was intrigued. My 7-year-old is new to the sport of competitive synchronized swimming – she joined the Waterloo Regional Synchronized Swim Club Under 10 Purple Team in September. She loves the sport, her teammates and her coach, and has progressed significantly during her months of training. That being said, she is still developing her strength and skills, thus most of her movements are below the water and difficult to photograph. When I contacted John, he immediately agreed to brainstorm ideas and give it a shot. Synchronized swimming in a studio? No pool? No problem! My daughter absolutely loved the photo shoot. John was able to capture the beauty, strength and grace of her movements on land and superimpose the water in later. The studio was warm and comfortable (although he did spray real water at some points) and John welcomed our input and suggestions. The outcome was stupendous! So much more than we could have hoped for. It is with great pleasure that I recommend John Wills Sportraits to anyone considering artistic or edgy photographs that they will treasure for a lifetime.” – Tanya Weissenboeck

So if you are interested in having a big beautiful custom print made of your young athlete…. give us a call today to book your session 🙂

And remember….. 10% of all print sales from our Epic SPORTraits will be donated to the “Free to Play” program at the Children’s Foundation of Guelph and Wellington. 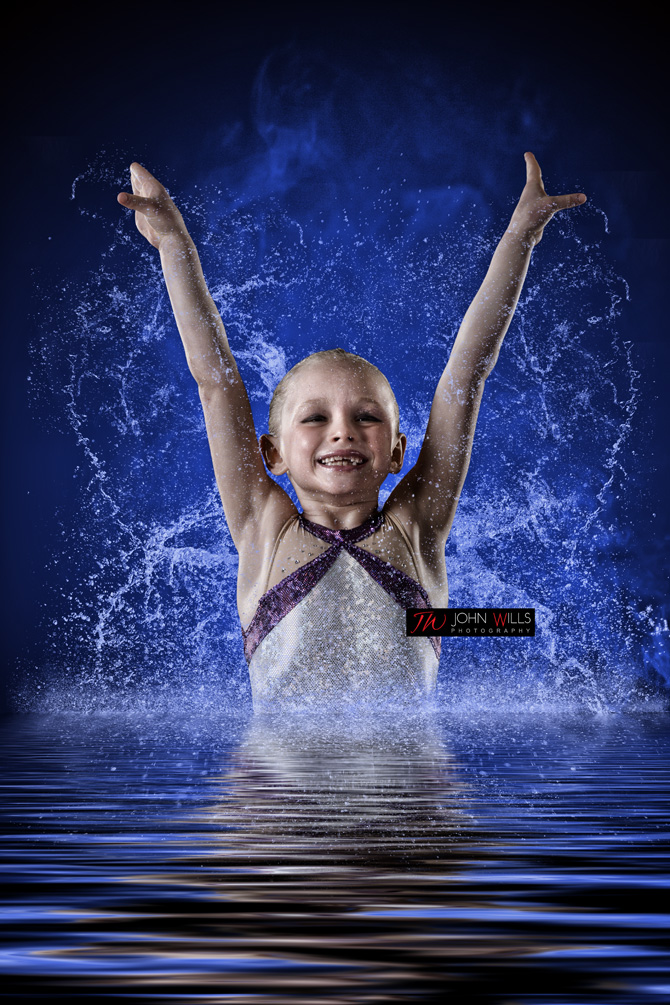